Links to the prior articles in this series: Part I, and Part II.

A lot has happened in my Low-Carb Journey over the last 12 years. As I mentioned, not all was sweetness (pun intended) and light on the way to improving my health with a low carbohydrate diet. Aside from the very unpleasant “yeast die-off,” I made a few serious mistakes, especially in the first year or so of my Low-Carb Journey back to health. 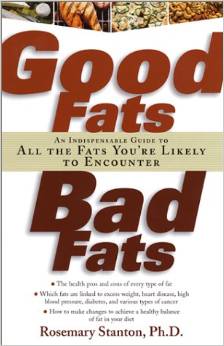 Probably the most serious of the mistakes was taking Atkin’s somewhat non-specific advice on fat pretty much literally. Since he said that we did not have to weigh, measure, or even worry about how much fat we had in the diet, we went out and bought a deep fryer. That was before we learned that there are good fats and (very) bad fats — and Atkins did not make any distinction between types of fat at that time. Since corn and soybean oil was relatively cheap, and we still at least partially bought in to the myth that saturated fat was bad for you, we used the veggie oils to deep-fry lots of stuff. As a result, we were loading our bodies with trans-fat, not realizing how much damage we were doing to ourselves.

Later, I learned about the role of trans-fat in the body. The body’s cells can’t cope with trans-fat properly, so the various structures that use and incorporate fatty acids end up having defects when trans-fats are used instead of the natural cis-fats (cis- and trans- are chemical designations for how the hydrogen atoms are arranged in an unsaturated fatty acid molecule). In particular, these defects cause the mitochondria (the energy-processing engine of the cell) to malfunction in such a way that they can’t process lipids very well, which, in turn, makes it far more difficult to lose weight. I now believe that is the most probable reason that after my initial 100 lb loss, I abruptly quit losing weight, and even started to gain a bit. The defective structures in the cells have a half-life of several years. That means that even after switching from unnatural vegetable oils to natural monounsaturated and saturated oils, it takes decades to repair all the damage.

Once we learned about the trans-fat problem, we quit using the deep-fryer, and eventually tossed it. 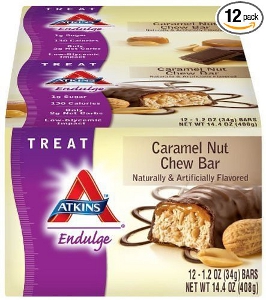 Dr. Atkins is probably turning in his grave.

Another error we made was in respect to low-carb junk food. Our forays into low-carb junk food consumption invariably resulted in a ‘stall’ or even a slight weight gain. Unfortunately, nutrition labels on “low-carb” junk food play fast and loose with the truth (not unlike the nutrition labels on “low-fat” junk food). At that time, “low-carb” candies, cakes, etc. were typically loaded with trans-fat — and typically weren’t actually low-carb. Even the Atkins brands had problems along that line. One of the interesting things about the “nutrition facts” label is that unlike fat grams, carb gram counts can legally be understated. This is because your politicians are afraid you might get too much fat, and not enough carbs!

[rant on] Politicians and bureaucrats as a group know less than nothing about nutrition, and need to stay away from the subject entirely. [rant off]

The operative word in either “low-fat junk food” or “low-carb junk food” is JUNK. It is not food. Once we learned to use things like Atkins bars only on rare occasions (there was a trip we took in Norway where the Atkins bars we packed were the only non-sugar-laden ‘food’ available, so it was better than any of the available alternatives), we did a lot better.

I mentioned earlier that for the first several months, I kept a detailed diet log. That enabled me to discover some very interesting things. One of my more interesting discoveries had to do with a sleep disorder. I previously mentioned that I have Obstructive Sleep Apnea (OSA). When I was diagnosed with OSA, I was also diagnosed with Restless Leg Syndrome (RLS), which is also a fairly serious sleep disorder, but not nearly as serious as OSA. I had been to several doctors about that problem, some of which prescribed treatments with side effects worse than RLS, so I had pretty much given up on trying to get that problem fixed. A couple of weeks after my mysterious arthritis disappeared, I started getting cramps in my legs, especially after a weight-training session. After a bit of research, I started supplementing with calcium, magnesium, and potassium, which fixed the cramps. It also made my RLS go away. That was the first of two discoveries concerning RLS.

As you can imagine, I was pretty happy about that! Unfortunately, about six months later, my RLS came back. Since I was still keeping a detailed diet log, I went there to see if I could discovered a possible cause. Sure enough, I found it. Back when I started on this diet, one of the things that I had completely eliminated was soda pop. I didn’t want to drink the stuff that was loaded with sugar for obvious reasons, but I really did not like the taste of any of the artificially-sweetened ones, either, so I just did without. About three days before my RLS came back, I had discovered a new cola (Diet-Rite brand) that was sweetened with Splenda, and actually tasted good, so I had gone back to the store and bought a whole case of the stuff, and started consuming three or four of them a day. That was the only major change in my diet for the preceding two weeks. Just to make sure, I cut out the Diet-Rite cola — lo and behold — the RLS went away again. I added it back, and, as expected, the RLS returned in a couple of days. We threw out the rest of the case of Diet-Rite Cola, and RLS became a non-problem after that. 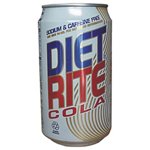 An alternative use for Diet-Rite: A Diversion Safe (from Amazon)

I was curious about just what it was about Diet-Rite Cola that would cause the problem, so I copied down the list of (rather bizarre) ingredients, and started searching the web (and that was before I ever heard about Google; today, that same search would be much easier). When I got to phosphoric acid, I got what appeared to be meaningful hits. I learned that the body has only one way of getting rid of excess phosphorus, and it involves combining it with calcium in order to be able to excrete it in the urine. Phosphorus is one of those things of which you get more than enough if you are getting enough protein in your diet. Phosphoric acid is added to most carbonated beverages to enhance “mouth feel” and the amount used provides way more phosphorous than the body can possibly use. So, in the process of getting rid of the excess, your blood calcium level is depleted, and that can cause all sorts of nerve problems, including RLS. Calcium is something your body has some trouble absorbing, and if you try to take mega-doses of calcium, it just causes constipation, without actually increasing the amount absorbed and used by the body. I firmly believe that phosphoric-acid-loaded carbonated beverages are a major cause of osteoporosis. 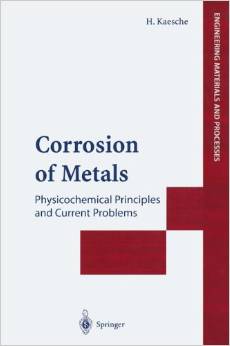 What you need to know about phosphoric acid…

I have since seen all kinds of “scientific proof” that phosphoric acid is completely benign, and can’t possibly be the cause of osteoporosis (or RLS). That sort of claim reminds me a lot of the cigarette ads with endorsements by doctors that I saw in magazines when I was a child.

The incident with the Diet-Rite Cola caused me to take a deeper interest in nutritional research, and in the next six months or so, I dug up and read many ‘studies’ in the field of nutrition, and argued at some length with the folks on sci.med.nutrition (a Usenet newsgroup) about several of them. The net result of that research was to convince me that the vast majority of the ‘studies’ being done in nutrition were more closely related to religion than science. I began to realize that I was essentially on my own to discover what did and did not work, and I also came away with the conviction that my own N=1 experiments were just as valid, if not more so, than what was passing for science in clinical ‘studies.’

After about 18 months, I had lost a little over 100 lbs from my peak weight. I don’t really know how much more, because the scale at the Arlington Recreation Center (where I went for my lunchtime weight training) only went to 350. That first 100 lbs was very easy — I was never hungry, and aside from that horrible rash that lasted about 3 weeks, I had no other really bad side-effects. In fact about the only persistent problem I had with the diet was the constant warnings from well-meaning fools (including some MDs) about how ‘unhealthy’ the Atkins Diet was. But around 250 lbs, my weight loss just stopped, about 50 lbs over my goal. I could lose a bit more, but for the first time in over a year, I actually got hungry, and would gain it back quickly. Georgene ran into exactly the same problem.

In the next part, I will go over some of the ‘tweaks’ that I tried in order to get back on track with my weight loss.