The Beginning of Our Low-Carb Journey

This is the first of a multi-part series on my journey from my peak weight of 350+ lbs to the present time. 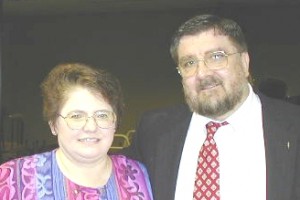 Rather than starting at the absolute beginning, I will start with the year that my wife got me to try a low-carb diet, 1999. In 1999, I had managed to low-fat-diet myself all the way to 350+ lbs. I don’t really know how much over 350 I got, because that was as much as the scale at the Arlington, Texas Recreation Center would go. (The picture shown to the left is from about 3 months after starting low-carb, at which time I weighed about 330.) That year, we attended a presentation of a bariatric surgeon who presented his favorite form of gut mutilation, the “RNY” gastric bypass, to a sleep disorders support group (I have obstructive sleep apnea, or OSA). I recall that he claimed that if you have been seriously overweight, and have been unsuccessful with losing it through multiple attempts at dieting, then the best chance you have of ever reaching your goal weight is gastric bypass surgery. He described the surgery in some detail, and then starting taking questions from the audience. I had a few. My first question:

That was a bit of a shock, but my wife (who was worse off than I was, having been diagnosed with diabetes) and I were at a point of desperation. We definitely fit the description of having been seriously overweight, and unsuccessful at losing it despite multiple attempts at dieting. I was actually contemplating how I would manage to come up with $50,000 to get an RNY operation for the both of us, when I thought of another question:

The thing that popped into my mind just then was the 1960’s book Calories Don’t Count, by Herman Taller, MD, which I remembered reading in high school. I also remembered that his low-carb diet had been “discredited” and that he had been convicted of violating some drug law by making false claims for some supplements he was selling. Since the 1960’s, I had tried a number of approaches to losing weight, including a very low-calorie diet given to me by a Navy doctor, the Weight Watcher’s Diet, followed by the Ornish and McDougall approach, during which I initially lost substantial weight, but then rapidly swelled up like a tick from being constantly hungry, followed by another round of Weight Watchers (this time, less successful than the first time), and now this knife-happy bariatric surgeon was saying that low-carb was the way to go! Without even thinking before opening my mouth, I blurted out:

After that, my wife and I decided to skip the gut-mutilation, and go directly to the low-carb part. It was actually mostly her idea. She had heard about Atkins being effective for diabetics, and she was having real problems with her blood sugar — two oral meds, and still so poorly controlled that her doctor told her she would soon be needing insulin. I was initially convinced that it would be just like any of the other diets we tried, and we would end up even worse off in 6 months, but I wanted to be the truly supportive husband, so I went along with it.

Next: Part II, Low-Carb was really different! Some of the surprises we encountered (not all good).