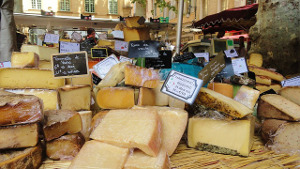 Over on a “journal” named Plos One, at journals.plos.org/plosone/article?id=10.1371/journal.pone.0117959 (I refuse to grace these morons with a live link, but you can copy & paste that if you want to see the original) is a write-up on two “studies” which talk about a number of more-or-less random confounders and throw in some nonsense including things like dietary surveys, self-assessments, and rodent behavior, and then conclude that cheese is “addicting.”

I like cheese, but I don’t recall “jonesing” over it. I occasionally eat 3-5 ounces of cheese in one sitting, sometimes even more than once a week, but I have never felt anything I would describe as withdrawal symptoms. I also avoid combining it (mostly, anyway) with red meat, because the casein in dairy products tends to inhibit iron bioavailability. Cheese might actually be addictive, at least to some people, but I did not see anything in these “studies” that would support that conclusion.

What I did see was that the “researchers” have been brainwashed into being psychologically incapable of blaming wheat for anything. I also saw that those “researchers” would not be capable of recognizing real science if it bit them in the butt. (E.g., the bad effects of fats are always confounded with carbohydrates). They do, however, have the profoundly-developed skill of completely ignoring anything that might contradict their worldview. Which makes the entire paper about religion, not science — despite the rather dazzling display of mathematical manipulation.

I am co-owner of NEquals1Health.com, along with my wife, Georgene (Mrs N=1). Read more about me on Howard's about page.
View all posts by Mr. N=1 →
This entry was posted in Nutritional Research. Bookmark the permalink.