Greek-Style Yogurt with no Draining! 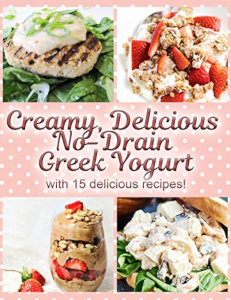 In our household, we have made our own yogurt for years. Well, I say “we,” but Georgene has actually done all of the preparation. We have been through all sort of yogurt makers with varying degrees of success. Although Georgene has never had a batch actually fail, we found that in order to get the yogurt we wanted, we had to throw half of it away, by draining it and discarding the whey.

We figured that was just because we refused to use the various commercial thickening agents that the commercial yogurt producers used. We consoled ourselves that our yogurt was probably nutritionally superior, and after all, the accepted procedure to arrive at Greek yogurt was — to drain half of it away!

Then we came along some information in a book by Jaelyn Jensen (available in Kindle or paperback), and discovered we were doing it all wrong. Well, not all wrong, but we were missing a couple of crucial steps.  After reading carefully Jaelyn’s procedure, we tried it first on the Dr. Bill Davis’s (of Wheat Belly fame) l. reuteri (not really) yogurt, and the result was AMAZING! The l. reuteri yogurt came out incredibly smooth and thick, just as Jaelyn predicted. And the pucker-factor was through the roof ( l. reuteri is generally more tart than regular yogurt anyway).

When we tried it on Georgene’s regular-style Greek yogurt (she does not like l. reuteri, but is nice enough to make it for me), it had similar results. It really does come out nearly as thick as butter without draining. And it tastes fabulous. We had been adding some nonfat dry milk powder to the initial mix, but that does not appear to make much difference. Maybe it increases the culture count, but we don’t really have any good way to measure that.
—
Note from Mrs. N=1:  Mr. N=1 thinks I make his yogurt as a courtesy, even though I don’t care for the l. reuteri myself at all.  Please, no one tell him that I have found that making him his own “special” treat yogurt keeps him out of my stash!  So much for “courtesy!”

So it turns out that to get the absolutely best yogurt, there are some secrets Jaelyn explains, and we find that letting her do the hard work of finding out and documenting all the important stuff has accrued to our definite benefit.  Her methods were developed making regular Greek yogurt, but we found that they applied equally well to the l. reuteri  as advocated in Dr. Davis’s site.

As a side note: I was recently diagnosed with a milk protein allergy, and quit consuming any milk or cheese products. On a lark, I got some A2 milk, and Georgene made some l. reuteri with the A2,  which did not set off my hives. We have also made the l. reuteri yogurt with regular milk (actually, half-and-half) and to my great happiness, I had no allergic reaction to it!  We discovered that one of the most important steps in creating the yogurt was detailed in Jaelyn’s book, and it denatured the casein to the point that I didn’t react to it.  I have certainly enjoyed adding yogurt back into my diet!

2 Responses to Greek-Style Yogurt with no Draining!