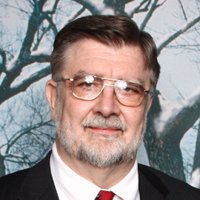 As mentioned in My Low-Carb Journey, Part III, I fairly quickly lost 100 lbs on a low-carb diet, then ‘stalled’ at around 250, about 50 lbs over my goal weight. Then I drifted slowly upward to nearly 270 over the next few years, where I stayed from about 2004 to mid-2009. During that time, I followed a grain-free, low-carb diet, yet I was not losing the weight. I also tried various types and levels of exercise, which also had very little effect (except that I did develop more strength and stamina).

My wife had a similar experience. She eventually elected to have bariatric surgery, after which she quickly lost nearly to her goal weight, then slowly started regaining. Mind you, we do not even have sugar, grains, or any other high-carb food items in the house. It was frustrating, but there were still some advantages to low-carb. The biggest advantage to me was that my crippling arthritis has never come back. A secondary advantage of low-carb is that I am never so hungry that I am seriously tempted to eat things like the free gluten-sugar-transfat bombs that somebody is always bringing to work and setting out in the break room. In 1998, I would have practically inhaled a donut (or two) in passing by the break room, without even thinking about it. Now, I don’t even regard such stuff as food. It’s quite liberating, actually. I’ve had compliments on my willpower, but I don’t think it has anything to do with willpower, and everything to do with the fact that I’m not ravenously hungry all the time, like I was on the low-fat or low-calorie diets.

But the frustration still remains. What is going on with this? My acquaintances who follow low-fat, vegetarian, or vegan diets gleefully point out the moral superiority of their chosen eating plans, but having been there, done that myself (all the way past 350 lbs), I remained unmoved. In early 2009, my concern grew as I watched myself continuing to gain weight, and I decided I needed to ‘tweak’ my diet. 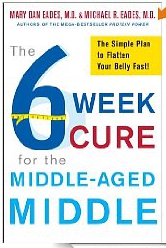 The 6-Week Cure for the Middle-Aged Middle

In late 2009, Dr. Michael Eades published The 6-Week Cure for the Middle-Aged Middle. While I’m not super gung-ho about this book, it was a turning point for me, and I can recommend it as having a lot of useful information. I bought it, read it, and did the 6 week program, and dumped about 20 lbs in 6 weeks, getting me back down to 250. While it was a good ‘reset’, I don’t regard the “3 shakes and a meal” plan to be all that practical. My solid-food meal generally had to be the lunch I packed for work, since it wasn’t feasible to keep a blender there. That meant that at home, my only food intake was protein shakes (with a specific, measured amount of various oils). However, once I went on to the maintenance plan, the weight loss stopped. Still, 250 is better than 270 (which is better than 350+). Until fairly recently, I continued to use a protein shake as a breakfast meal (usually loaded with butter, coconut oil, and olive oil, which keeps me from getting hungry for several hours). 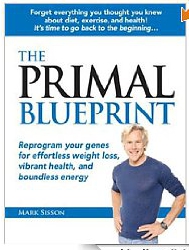 As I got more involved with the current research, I tried some other tweaks. I got Mark Sisson’s The Primal Blueprint, which I found fairly impressive, but I marvelled at just how expensive a ‘primal’ diet really is. Actually, the primal diet is not really even available, since nearly everything in our food supply has been massively re-engineered (usually to increase sugar content or to make things easier to store). Not only that, most of the stuff available, even in the so-called “health food” stores is often intentionally labelled in a confusing manner. You can only approximate a primal or Paleo diet.

I started following many blogs on the subject, and even signed up for the 4th Annual Low-Carb Cruise, where I met notables such as (links are to their respective blogs) Dr. Mary Vernon, Tom Naughton, Jimmy Moore, Dr. Andreas Eenfeldt, and many others. After the cruise, I started following the blogs of many of the folks I met on that cruise. By the way, that was by far the best cruise vacation I have ever experienced, and immediately after that, Georgene & I signed up for the 5th Annual Low-Carb Cruise (link is to promo video on YouTube), which sails in only a few days (so it may too late to sign up — unless you are a single male willing to share a stateroom with another cruiser looking for a roomie).

While meeting all those folks was exciting and informative, I was seeing a lot of conflicting information. One source would claim that intermittent fasting was really good for you, and several others would insist you should *never* fast, or at most, do a partial fast. Some folks would swear that dairy was pure evil, and others would point to the wonderful results they had from including lots of cheese, butter, and cream. I even heard one low-carb-guru-wannabe MD say that vitamin D3 supplementation was the wrong way to go, and that your vitamin D status wasn’t really all that important! I heard and read many recommendations for a huge variety of supplements, while other sources claimed that if you were ‘faithful’ to a Paleo diet, you didn’t need supplements at all.

In my mind, the thing to do when confronted with contradictory information is to research it as deeply (and skeptically) as I can, and then do some experimentation. There have been a couple of things that I have found work quite well for me.

I found that if I am keeping my carb count really low, and keep my protein to a moderate amount, I can eat as much fat as I please without gaining weight, or even losing slowly. On a recent cruise, I tried adding a pat or two of butter to every cup of (mostly decaf) coffee that I drank, as well as adding it liberally to all of my meat and vegetables. I got the idea from the “BulletProof Executive” (despite Mr. Asprey’s utter disdain for decaf). I lost a pound on that cruise. While a one pound loss over a week’s time isn’t really significant, going for a week eating as much fat as I could without gaining weight is definitely significant. Especially when a prominent Quack (*cough* Ornish *cough*) publicly trumpets the false claim that “Eating fat makes you fat!” and trots out a lot of fundamentally-flawed “research” to reinforce that disinformation. Some of the other stuff I found on the BulletProof Executive blog can be adequately explained by the placebo effect, or Hawthorne effect. It is not at all uncommon for somebody who discovers something that seems to work to conclude that he or she has all the answers. Even more so if you have an MD after your name. Mr. Asprey does not have an MD, and doesn’t claim to have all the answers, but he sure sounds like he is convinced about several things I consider to be very low probability.

I do think that I have found some of the answers, at least as they apply to me.

For instance, I have found that if I eat 6 ounces of (grass-fed, of course) beef, I am not immediately satisfied, but two hours later, I’m not hungry at all, and that feeling will typically last another 4 hours or even longer. But if I eat twice that much (or more), I feel full and satisfied immediately afterwards, but about an hour and a half later, I’m hungry again. From that experience, which I have verified several times, I have concluded that one of the potential problems I have had is eating too much protein. Going back to the Six-Week Cure for the Middle-Aged Middle, one of the things that Dr. Eades promotes is the consumption of large amounts of protein, typically twice to three times the minimum amount needed by a healthy person. His protein shake recipe calls for 40-50 grams of protein, three times a day, plus a regular meal of meat and vegetables, for 200 grams/day or more of protein. I think a more reasonable amount for a person my size and weight is closer to 100 grams/day, maybe with a 10%-20% fudge factor to compensate for any digestive inefficiencies. 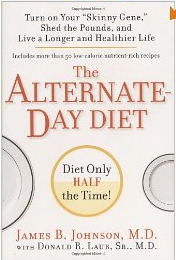 While I have seen many authorities pooh-pooh the idea of a “set-point,” I am convinced that I have one, and it is around 248 lbs. Which has gotten me interested in the writings of Dr. Jack Kruse and Dr. Ron Rosedale, mainly about leptin, and its strange and sometimes confusing role in obesity. I’m looking forward to meeting Dr. Kruse on the upcoming cruise. I’m going to ask him some probing questions about his recent TEDx talk. Interestingly, Dr. Rosedale mentions that excessive protein is a problem for several reasons, which confirms my own experience, but I’m not sure that I agree with his contention that you absolutely must spread your protein consumption out evenly over the day. Dr Rosedale is also very much against fasting or even partial fasting, yet my wife has had splendid results lately from the Up Day, Down Day, or Alternate-Day Diet program of Dr. James Johnson. I tried the JUDDD for about a month, with mixed results (I’ll discuss that at length in another post — soon, I promise).

I am currently convinced that my current predicament is a direct result of several years (from childhood on) eating massive quantities of sugar, bread, and ‘plastic butter’ (margarine), followed by several years of yo-yo dieting on various different plans, plus nearly a year on antibiotics. The net result has been semi-permanent damage to my metabolism, or what is commonly referred to as “metabolic syndrome.” Unless and until I find a way to repair that damage, I will face the choice between consciously restricting my diet for the rest of my life — or blowing up like a tick. From what I’ve read, repairing the damage may take decades.

I have not given up, and the health gains that I have received from low-carb are sufficient to keep me on course, even with a VA doctor who knows less than nothing about nutrition trying to push me onto a low-fat diet, known muscle toxins (statins) or pills that damage digestive processes (Celestipol).

This post more-or-less brings this series up to to the present. I’ll be back-filling some details later, and I will continue to document my low-carb journey, potholes and all.

P.S. Jimmy Moore had a podcast back in February about a low-carb-friendly MD in Allen, TX, who is now my primary care doc. Thanks for the referral, Jimmy!