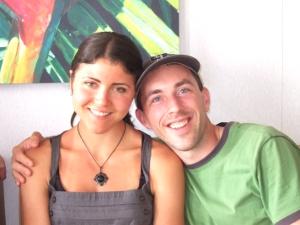 Denise Minger And Chris Masterjohn on the 2012 Low-Carb Cruise

This is the last of the podcasts that Georgene and I did on the 2012 Low-Carb Cruise. This was with the “mystery couple” that I mentioned in the post/podcast I did with Jeff and Dee Miles. Denise Minger and Chris Masterjohn had arranged to come in at 4:30, but instead arrived at about 4:10, after discovering that the chow line wasn’t open until 5, and they weren’t interested in pizza or ice cream, the only two “food” items available before then. They sat and listened as we recorded with Jeff & Dee, and when we wrapped that one up, we immediately started in on their interview.

It took longer than I anticipated to get this podcast up, because I managed to screw up the recording. Just before starting the session, I remarked that it looked like I had enough battery to do the interview.

Not only that, but the backup recording device we had in place also failed. It’s ironic that the only time the backup recorder failed to record anything was also the one time that my main voice recorder quit in the middle of a session.

Fortunately, I only managed to lose a short segment. I didn’t notice exactly when the recorder quit (too bad it doesn’t have an audible alarm), but I estimate that I lost approximately 3 minutes of the session. The part that was lost included a discussion of how close Chris was to getting his PhD in “lipidology” (that’s a joke from Tom Naughton’s roast). When I noticed that the battery failed, Chris started back at the point where he discussed the topics he was currently studying.

Well, chalk it up to added experience. Lessons learned:

Despite all that, we had a delightful time, and managed to get some good recording.