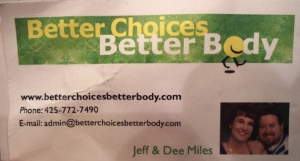 On Tuesday of the cruise week, I ran into Jeff and Dee on the Lido deck just before lunch. They were wearing their “Low Carb Cruise” nametags, so I struck up a conversation. Jeff mentioned that he had lost a substantial amount of weight, and he also mentioned that he used a CPAP. Since I’ve used a CPAP for over 20 years, I was eager to compare notes. I told him that I was trying my hand at podcasting, and asked him if he and Dee were willing to be guinea pigs. They agreed, and we set an appointment for Wednesday evening. I got a copy of Dee’s business card (and you can see by the photo that it suffered a bit of wrinkling while riding around in my pocket).

Unfortunately, Jeff was not feeling well Wednesday evening, and we re-scheduled for Thursday. He called early Thursday, and said he had the same case of whatever it was the night before, and he suspected a specific food item. He avoided that particular item on Friday, and he called around 3:30 to tell us that he was able to come visit with us at 4:00 that afternoon.

Just after Jeff called, I got another call for an interview with another couple at 4:30, so I figured we would would just knock out two in a row. The other couple arrived about 2 minutes into the recording session — when we spoke on the phone, they indicated that they were going to grab a bite to eat, but found the chow line was not open yet (and they don’t eat pizza or ice cream), and they headed for our cabin early instead, not realizing that I had invited Jeff & Dee to come in just before them. I’m mentioning that so you’ll understand the commotion that occurs a few minutes into the recording. I’ll tell you more about that mystery couple when I get their podcast ready to post.

Since I had two recorded podcasts under my belt at this point, this session went a lot more smoothly (except for the early arrival, which I decided not to edit out of the recording), and I did very little editing. 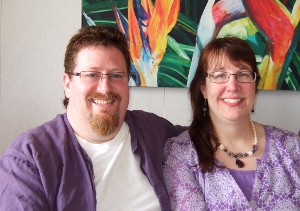