The Friends of Bob A. 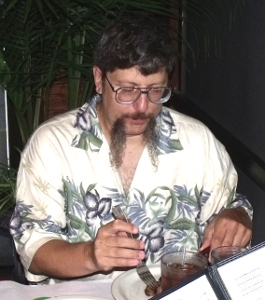 It was a bit sad that the Low-Carb Cruise had to end, but while we were there, we made plans for the 2013 cruise. Not quite satisfied with just planning for a future cruise, Scott Merritt (owner of Pegasus Publishing) came up with the idea of forming a new group on FaceBook whimsically called “Friends of Bob A” (for the late Dr. Robert Atkins).

The group grew to include several folks who weren’t on the Low-Carb Cruise, but are generally interested in low-carb and/or paleo eating. Scott then put together a meeting of the folks near the the DFW area at a restaurant in Plano called Brazilian Cowboy, which came together Saturday evening. There were some folks that traveled quite a distance to be there. Becky Gandy, the lady who put together the Low-Carb cruise, came to the get-together all the way from Spring, Tx (a northern suburb of Houston, about 180 miles away). The person that traveled the farthest was Ramona Denton. 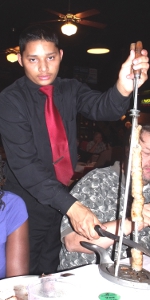 The Brazilian Cowboy is an all-you-can eat meat & salad place similar to Fogo de Chao, but less expensive, by about half (it’s still on the pricey side, though — dinner runs about $25/person after tax & gratuity). It features a variety of meats, which are continuously served at the table by waiters carrying long skewers of the meat, and large knives ——-> 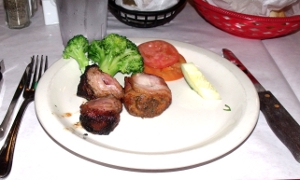 I went through the salad bar, which had a much smaller selection of veggies than Fogo de Chao, but then, I really wasn’t after the  veggies anyway. I did get a bit of broccoli, some cucumber, and a couple of slices of tomato. Shortly after I sat back down, three waiters came by, each with a different type of meat, and I remembered to take a photo before I started digging in. After about 8 different cuts of meat, I pretty much lost track of which was which. I also found that I was way too full to eat another bite.  That fullness persisted through the evening, and as I write this (just after noon on Sunday), I still feel overfed, and I have not eaten anything since the meeting.

Some of the meat was quite tasty, some seemed overdone & had a chalky texture, and some was too salty for me. However, the overall experience was quite good. At least until time to pay the bill. We had asked for separate checks, but for reasons I’m not sure I completely 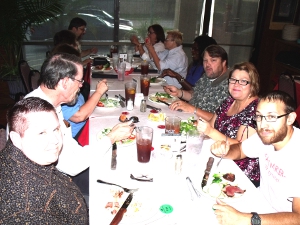 understand, they combined everyone into one check, and we had to figure out who owed what. Not everyone had gotten the all-you-can-buffet (there was a separate menu), and some had gotten tea or coffee. In addition, there were three folks there who had obtained a discount coupon, which I wish I had done. The process was further complicated by a live band that had just finished setting up, and started playing (I’m functionally deaf in that kind of high-noise environment, and I had to remove my hearing aids because they were overloading and distorting). The net result is that it took about 20 minutes to get everything settled.

Afterwards, we gathered for a bit in the parking lot (where we could actually talk!), and I arranged with Scott to do a podcast with me at some undetermined future date. We plan to discuss some books by Joel Salatin (recently featured on The Bulletproof Executive), once I have a chance to get one or two of them and read them. Scott has several of Salatin’s books, and he has a lot to say about them, since Scott runs a ranch, in addition to Pegasus Publishing. Scott is going to an event in Indiana next month which Georgene and I also plan to attend (I’ll be writing more about that soon), so we might be able to do the recording while we are there.

I certainly hope that we manage to put together another meeting of “Friends of Bob A,” but I hope that the venue is quieter, and the checkout process is less complex. One suggestion is Golden Corral, which is about 1/3 of the price, and has a private meeting area which is quiet enough that you can hold a conversation without screaming. Of course, while it’s possible to get a reasonably low-carb meal at Golden Corral, you have to pick your items very carefully. Plus, the food at Golden Corral tends to be on the “tired” side from sitting too long on the buffet. However, it would work ok for me, and I think Georgene could probably tolerate it. 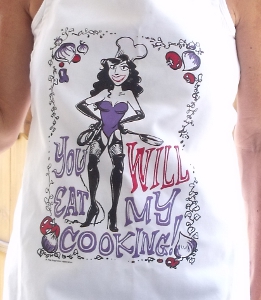 You WILL Eat My Cooking!

P.S. One of the reasons that I wasn’t able to eat quite as much as I expected to at the “Friends of Bob A” get-together was that I had eaten a fairly substantial low-carb meal earlier (around 2pm) at a family party. The only reason I bring that up is because my wife’s niece was wearing an apron that I thought was cute/funny, which I wanted to share with you. It’s in the photo to the left. 🙂

Sorry, but I have no idea where she got it…

I am co-owner of NEquals1Health.com, along with my wife, Georgene (Mrs N=1). Read more about me on Howard's about page.
View all posts by Mr. N=1 →
This entry was posted in Diet, Health, Low Carb Cruising!. Bookmark the permalink.