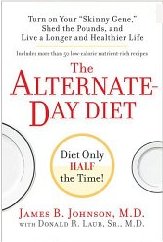 My wife got me interested in the Alternate Day Diet back in April. The thing that really got my attention was the fact that on the JUDD Support Group, there were several reports of people who had lost more weight than they intended to. (Ordinarily, I would have provided a link here. I do not link to this group because the outfit that runs it has a draconian outbound link policy, and has even permanently banned such notables as Fred Hahn from the group. The determined reader will be able to locate the group anyway.)

Just how often have you heard that complaint in a weight-loss support group?

I thought as much. That was a first for me, too.

I should have said “FINALLY” got me interested. She hadn’t really applied any overt pressure, but managed to drop a hint several times a week. (Yes, I’ll admit it, I think she has me figured out. At least in that regard.) She started following the JUDDD diet plan (mostly) since back in November or December, and by April, she was noticeably thinner than she was in December. So, my first task was to read the book The Alternate-Day Diet (paperback; here’s the Kindle edition).

For starters, for something published only 4 years ago, it contains a large amount of stuff that has been known to be false for a decade or more. I thought maybe Dr. Johnson could be forgiven for not being aware that there is no such thing as a “healthy” grain, whole or otherwise, since that information has only been fairly high-profile for a couple of years. However, he still pushes that same disinformation on his website today. He also still fervently believes in the cholesterol myth, and he states clearly (several times) that a low-carb diet is unhealthy. That leads me to the conclusion that he is Yet Another Diet-Guru-Wannabe-With-An-MD, who has discovered something that appears to work, and immediately concluded that he alone has all the answers to Life, the Universe, and Everything.

He didn’t show any strong evidence that he even knows how to ask the right questions. Nor does he demonstrate any clear understanding of the concept of confounders in this book. That puts him squarely in the same league as Ornish and Oz. In other words, an MD who knows less than nothing about nutrition; someone I would simply dismiss out-of-hand in the absence of some other compelling factor. In this case, the compelling factor was Georgene’s successful use of intermittent partial fasting (IPF), which she assured me was not completely compliant with Johnson’s flawed notions. (One of the reasons I married her was her above-average intelligence!)

Despite the copious quantity of fluff and marginal disinformation, there is some interesting and useful information in the book, beginning with the analysis of some rat longevity studies.

RAT Studies?? Yes. The main problem with human studies in longevity research is that none of them could possibly be concluded in time to do you or me any good. That leaves us with studies of shorter-lived animals, the results of which can be analyzed, and possibly used to design studies in humans. The human studies, of course, would have to substitute estimates based on (usually flawed) biomarkers in place of actual results (the most useful end-point in a longevity study is obviously the age at time of death, although you might also want to consider how long the individual had an acceptable quality of life), but it’s the best we can do right now. We just have to keep in mind the limitations while we try to dig out as much information as we reasonably can.

Johnson covered some intermittent-fasting (IF) studies in rats, and found that rats that were fasted on alternate days, and allowed to eat ad libitum on the other days, were generally leaner, more active, and lived, on average about 5-10% longer than the control group, which was fed a daily allowance determined to be “normal” for that particular type of rat. A third group, fed 60% of normal maintenance calories daily, was even thinner and more active than the IF group (there appears to be a typo in the book at this point — in one place, Johnson says 60%, in another, 40% — I believe it’s 60%), but had, on average, about the same lifespan. In addition, the IF group had better resistance to certain types of trauma than either the 60% group or the control group.

One fly in the ointment… Although the average lifespan was increased significantly in both of the test groups, there were a few individuals in both test groups that died prematurely. I didn’t find that exactly encouraging.

There was a 3-year study on humans, where the test group was restricted to 900 kcal/day on “down” days. In this study, there were significantly fewer deaths from all causes in the test group. Plus, the fasting days didn’t appear to directly kill anyone in the test group, which was encouraging.

Dr. Johnson then decided to try his own modified version, in which he ate 20% (a number which he apparently pulled out of thin air) of his normal maintenance calories on “down” days, and normal maintenance calories on “up” days. He quickly lost 35 lbs, and then started using it on his own patients (without, as far as I could tell from his book, any additional prior testing, which I consider to be an ethical lapse traceable to typical MD hubris), from which he reported consistently good results (yes, well spoken-of in the advertisement, indeed), even from patients who admitted to being less than fully compliant. This appears to be the point at which Johnson decided that he alone had all of the answers, and proceeded to write a book about it.

Another study of female mice showed an increased lifespan of nearly 40% (!) from fasting 4 consecutive days every two weeks. Unexpectedly, the mice in the fasting group were generally heavier than the control group (!).

I looked for some studies on IPF, other than the one human study cited by Johnson, but I wasn’t able to find any. I’m sure there are some — I just haven’t found them yet. Johnson does make the blanket claim that IPF will provide almost all of the benefit of IF, and it does appear that IPF is more tolerable than complete fasting. He certainly does have a large group of raving fans, which you can see if you make the effort to hunt down the JUDDD group.

So, after several months of my wife’s hint-dropping, I decided to try it for myself. Aside from the week of the Low-Carb Cruise, and another week where I was ill with a cough and chest congestion, I have followed my personal version of the JUDDD diet (I ignored his dire warnings about low-carb).

In my next post, I will cover my experience with my low-carb version of alternate-day partial fasting.

If you have located any interesting studies on IPF, please let me know about them in the comments. Thanks!