Wednesday on the Low Carb Cruise – We’re in Jamaica, Mon!

Good morning! Today is Wednesday, the first port day of the cruise. This morning, Howard and I had an opportunity, finally, to eat in the Main Dining Room for breakfast. He had a great low carb breakfast of poached eggs and smoked salmon. Of course he set his bagel aside and politely asked for some real cream for his coffee – and the waiter brought us some real cream! Since we were not at a table with other low-carbers, we managed to snag the rest of the pitcher full of cream to use later! I had my once-a-cruise (when on Carnival) indulgence of Eggs Benedict, complete with English Muffin. I only ate about half of one side of the muffin, but they make them so nice, I make an exception to my normal eating rules for this particular treat. 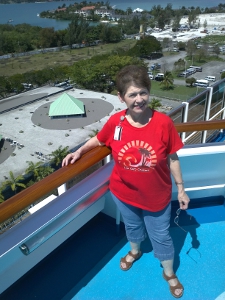 In my goal jeans!

After breakfast, we walked the ship and got our bearings. We are, of course, well-acquainted with Deck 4, where the Conference Center resides, and we know where to get food in the Lido, natch, but I have been hearing for some time all about the shops, the Red Frog Pub, and the other exciting new venues that Carnival has added to this ship that I haven’t seen yet.

So we started with the fitness center, where I spent a little while on the elliptical, to get my joints moving, and Howard applied some Fred Hahn Slow Burn principles while the very young and very naive fitness instructor was trying to sell him a $129 package of “detox” treatments. The instructor never quite managed to say what toxins, exactly, would be removed…and completely got the liver/sugar/fat process backward, but hey, he was good looking enough to be distracting – to me. Howard didn’t fall for it, though (and in truth, I didn’t either), and we escaped the fitness center with our money – and our “toxins” – intact. I wonder what this fitness “instructor” would have to say if he knew we had one of the world’s leading recognized authorities on fat metabolism right here on the ship with us!

We had heard nice things about Serenity, the adults-only area, and since we both have done our thing with kids….we like the concept of adults-only. It’s a nice large area with two warm tubs – yes, I said “warm.” They were barely above body temperature, if that, though perhaps I am being unfair because the tubs were either undergoing or just had undergone maintenance. We may go back up there when the sun is a little less direct and see what they really feel like.

From the Serenity area, we were able to enjoy watching the water park area. It was the biggest I’ve seen on a ship, of course, and appeared to be in full operation while in port, even though there were only a few people using it. I thought I had heard there was a zip line, and maybe there is, but I didn’t see it this morning. The zipline is dangerous enough to require attendants, and most likely the zipline is only open at specified times.

After a few sweaty minutes on Serenity Deck, we went down to Deck Five and walked through the Casino (yes, it smells like smoke, despite Carnival’s efforts to satisfy both smokers and non-smokers) , then through to the Red Frog Pub, where last night’s Karaoke was held. Unfortunately, Howard and I were horizontal and unconscious before Karaoke even started, so I can’t tell you anything about it. I am sure there’ll be pictures posted somewhere, though, likely on lowcarbcruiseinfo.com. Jimmy seems to have a preference for singing “Elvira” with Tom Naughton. They do it together every year and their performance tends to be the hit of the session.

Finally, we made a trip around the promenade. I mainly wanted to check and see what was visible from the promenade area inside the staterooms. The cabins on level five that face outward have reflective window-coatings, though I think even reflective coatings reverse at night. After dark it’s time to employ the curtains, I’m sure. I also was concerned what and how much would be visible from the Promenade of the upper balconies on decks 6, 7, 8, and higher. Not much, it seems, is visible, which is nice, since our balcony is on deck 7.

Our plans for this afternoon include possible interviews with Jimmy and Christine Moore, and we may have also snagged an opportunity to visit with Denise Minger and Chris Masterjohn!

So far, this cruise as (as did last year’s) way outstripped my anticipation. It seems that every year it gets better, and plans are already being made for next year’s Low Carb Cruise number 6! Stay tuned, as Howard will soon be posting the results of his interviews, though I can’t say exactly when that will be because they haven’t happened yet. He will also be adding some photos, though likely the bulk of photos will be added as a separate page, maybe when we return. We’ll be in touch!