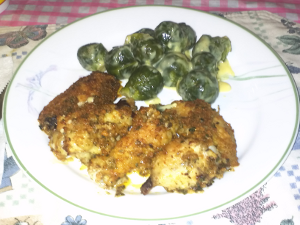 This evening, Georgene decided that her mouth was set for chicken wings, using the “Heroin Wings” recipe from Dana Carpender’s 500 Low Carb Recipes cookbook. So, after we returned from the grocery store with the bag of chicken wings (and some Brussels sprouts), she shooed me out of the kitchen and set to work.

Now, I should mention that Georgene is constitutionally incapable of following a recipe 100%. So instead of regular salt, she used jalapeno salt. Then, for good measure, she added some cayenne pepper. While the wings were cooking in the oven, she steamed the Brussels sprouts and made some real hollandaise sauce — the real deal that you can’t buy commercially anymore, and most folks are afraid to make because they are afraid of undercooked egg yolks. Well, Georgene has the technique all figured out for getting the yolks cooked “just enough” and producing a smooth, tasty sauce.

Well the result was… scrumptious. The jalapeno and cayenne gave the wings just that extra little ZING that we Texans like so much, and the hollandaise sauce was the perfect complement to the Brussels sprouts.

I never ate that well when we were struggling with the unhealthy low-fat fad diet!

We’re not going to publish Dana’s recipe here because you really need to go over to Amazon and buy her book. After all, that’s how Dana makes her living, and it’s uncool to rip off somebody else’s hard work. Plus, it’s a really good book (all of Dana’s stuff is good), and not very expensive, so there’s no good reason not to get it. Then you can make your own “heroin” wings, and even try Georgene’s tweak.

While you’re over on Amazon, check out Dana’s other books, too. She’s written a bunch of them.

Oh, and if you ask really nice, you might get Georgene to tell you her secret for making hollandaise sauce.

I am co-owner of NEquals1Health.com, along with my wife, Georgene (Mrs N=1). Read more about me on Howard's about page.
View all posts by Mr. N=1 →
This entry was posted in Book Reviews, Health, Low Carb Fun. Bookmark the permalink.