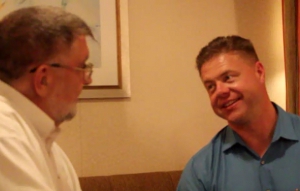 I had wanted to get Dr. Eric Westman on together with Dr. Adam Nally (Twitter: @docmuscles), since they are both members of the American Society of Bariatric Physicians (Dr. Westman is this year’s president), but Dr. Westman proved to be somewhat elusive, and I decided to go ahead with Dr. Nally by himself.

Dr. Nally graciously agreed to come up to our cabin just after the 2nd “formal” night dinner on the 2014 Low-Carb Cruise, and we had a really delightful chat. I kept the video to under a half-hour, but we continued to chat for quite a while after the end of the video. I hope to do a follow-up interview with Dr. Nally — maybe on next year’s cruise, or perhaps an online interview in a few months.

Some biographical information on Dr. Nally