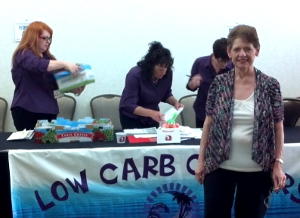 Georgene at the check-in desk

Georgene & I attended the pre-cruise dinner this evening. It’s now a bit past our bedtime, but we wanted to get a post up before we hit the sack. Pictured to the left is Georgene at the check-in desk, with some of the cruise volunteers busy in the background.

The dinner began with a fresh spinach salad, and the main course featured London Broil, mixed veggies, and something that for all the world looked like mashed potato. I started to ask Georgene about the potatoes, and she headed off thequestion by telling me that what looked like potatoes was actually mashed celery root. 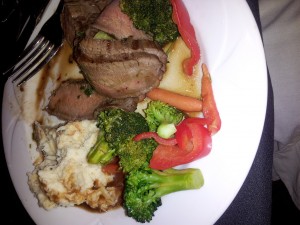 I took a cautious bite, and my taste buds told me in no uncertain terms that this was mashed potato! A few more small bites, and I was able to detect a bit of extra fiber.  However, if I hadn’t been paying really close attention, you could have told me that it was a scoop of mashed potato, and I wouldn’t have known the difference. And I would have left them on the plate (since I don’t eat potato). I didn’t think to take a picture of the food until after I had started eating, but you can see the “mashed potatoes” on the right.

We were also treated to the Tom Naughton Celebrity Roast, which was excellent. Tom is an experienced and polished performer, and his roast was superbly done. Unfortunately, none of the photos that I got of the roast turned out very well. I hope I get some reasonably good pictures of the roastees later in the week.

I spoke briefly with Tom before the roast, and told him I’d like to do a short interview. He graciously accepted the invitation, so now all I need to do is schedule a time.

Tomorrow is the Big Day!