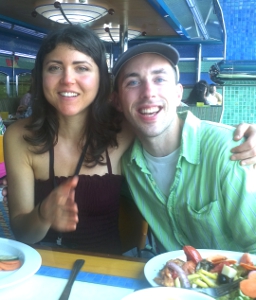 Howard and I had lunch today with one of the nicest couples we are likely to meet on this cruise…and trust me, between Dana Carpender and Eric Schmidt, Tom and Chareva Naughton, and several of the other couples we have already met from last year, Denise Minger and Chris Masterjohn are definitely high on the list of nice people.  I say that because Howard and I are easily old enough to be their parents, and still, they were warm and engaging, polite, and they also had plenty of substance to say. Generally, they are just an overall nice couple.

Both Denise and Chris are featured presenters on the program for our cruise.   Last night, Tom Naughton did a wonderful job roasting both of them, but the things he told us about Chris were interesting, to say the least.  Let me just mention that one of the least unusual things Tom told us about Chris is that he juggles….with rocks.  And trust me – there’s plenty more  interesting facts about Chris where that came from!  Chris will soon receive his Ph.D. and still he managed to have time for us and looks like he’s going to enjoy the cruise.  He says it’s his first “real” cruise.  I sure hope he enjoys the cruise because I’d like to see him and Denise come back again next year.  In fact, I hope to see a lot more of them again THIS year on the cruise.

And then, there’s Denise.  Sweet, tiny, unassuming Denise Minger, the little English major girl that single-handedly took down T. Colin Campbell, the author of The China Study. Sorry, Dr. Campbell, but you were way outclassed.  That’s what happens when a person lets that “Dr.” get into their ego as well as in front of their name.  I’ll have to admit that many of Denise’s arguments were way beyond me, but I do know that they are widely considered to be an absolutely devastating takedown of the good doctor’s treatise.  Thanks to Denise, if I had a copy of The China Study would be a great, albeit overpriced, substitute for package filler.

There have been a few not-so-pleasant things happen so far.  Jimmy Moore had some money stolen from his hotel room during his pre-cruise stay.   Of course, asking the front desk about his stolen money got him nowhere.  Then, Jimmy’s wife Christine accidentally left her purse in the room as they were leaving to get on the ship.  When they realized her purse had been left, they called the hotel desk, but they said no purse was left in that room. I am not sure what all was in her purse.  Perhaps she was lucky enough to have taken her cash and maybe even her passport out and put them in another, safe place.  I haven’t had a chance to talk to her just yet, so we’ll see.  In addition, Jimmy has been dealing with some very undeserved criticism by critics.  Some of them were not only vicious, but also way beyond any semblance of what one can say in good taste.  I can only say: no, Jimmy’s not perfect, and he has said that himself.  However, *I* will say that the number of people Jimmy has helped has been in the thousands.  Jimmy:  keep that in mind and know that we are rooting for you!

We just returned from dinner tonight. I would really not characterize it as one of the highest points of the cruise so far.  One of the things I had been afraid of may have actually come true, but it’s a little early to judge.  It’s the nature of crowds that people become more anonymous in them.  Last year’s cruise numbered about 100 people, which gave everyone an opportunity to spend some quality time with each of the speakers. The speakers were super-friendly and very available.  This  year, we have some 260+ in the group, and for some reason, a large portion of the speakers are mainly concentrated at one dinner table, leaving the people who came to see them without access to their wisdom. Now, don’t get me wrong: this isn’t a major emergency. It’s just that I hope on future nights, the speakers will be spread around a bit more, giving the cruisers who came to see them more of an opportunity to interact with them.

There aren’t any pictures of tonight’s dinner.  For one, my dinner was so late that everyone else at my table had already finished eating before mine even arrived.  When it did arrive, it was overcooked  and dry. I felt quite rushed, since my dinner was served so late, and we had to get out of there for the next group of diners.  However, it was just one night, and we shall see what tomorrow will bring.  The waiter was extremely apologetic.  I am certain it wasn’t his fault, or even if it was his fault, it was simply that he just forgot.  As hard as those guys work, it’s a wonder they remember as well as they do!

Tomorrow is our first conference day.  Lots of good speakers to listen to, and I hope a lot of new things to learn.  It will be fun, as well as serious.  Gotta get there early to get a great seat!

8 Responses to Lunch with Denise Minger and Chris Masterjohn