I Recorded my First “Podcast” with Jimmy and Christine Moore

In my last post, I declared that I was going to do something completely different (at least for me). Well, I did, but it ended up taking more time than I had to get it posted. 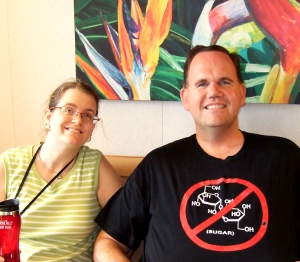 I recorded an interview with Jimmy and Christine Moore. I had intended to just do a 15-minute chat, and post it here, but the chat went on for the better part of an hour. That’s pretty much what you get when you have four people who like each other, and love to talk. Unfortunately, it’s a pretty disorganized ramble, and I’m not sure that a lot of it would be of much interest to anybody else. Also, internet time here aboard the Carnival Magic is expensive, slow, and unreliable, which hampers timely posting of anything. One reason that we haven’t put up many photos is that the process of uploading and labeling them ends up burning a frustrating large number of our expensive internet minutes. Even though I can do all of the cropping and resizing off-line, it sometimes takes three or four tries to upload and tag a single photo.

Jimmy and I talked a bit afterwards about the recording, and since he’s much more experienced at that sort of thing, he gave me several tips for improving future interviews. The current recording is going to take a lot of time to edit down to less than 20 minutes (my original goal), so that may not happen until we get back to our always-on high-speed internet connection. I hope to post the recording in about a week, and perhaps a transcript. Georgene took lots of notes, so we may do a summary post before then.

I have two more interviews scheduled for today, but I think I’ll keep them “under wraps” until I get them done. They are with folks in the group I’m pretty sure you’ll recognize. 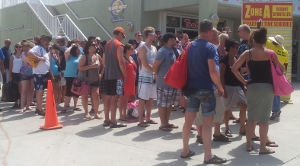 Before we get to the interviews this afternoon, Georgene and I plan to do a little bit of shopping at the Cozumel tourist trap. She has one item in mind to get as a gift for her daughter. I don’t have anything specific in mind to buy, but I might pick up some trinket if I find one that suits my fancy. We plan to make the ashore time brief, so we will have time to eat some lunch in the Lido prior to our first interview of the afternoon. With some luck (and work), we’ll have a couple of interviews worth posting as soon as we cross all the technical hurdles.

I am co-owner of NEquals1Health.com, along with my wife, Georgene (Mrs N=1). Read more about me on Howard's about page.
View all posts by Mr. N=1 →
This entry was posted in Diet, Fitness, Health, Low Carb Cruising! and tagged Carnival Magic, Christine Moore, Cozumel, Interview, Jimmy. Bookmark the permalink.