Cruising Again — and Another N=1 Experiment 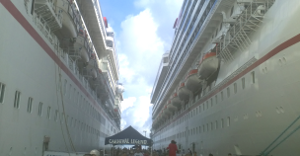 In Port at Cozumel

I have a new n=1 experiment going, but I didn’t have time to announce it in advance due to my work situation and feverishly preparing for my Labor Day cruise.

First, though, I need to do a followup on the results of the alternate-day fasting experiment, which I’ve been doing since May. The results have been generally positive, but somewhat mixed. On the up-side, I seem to plateaued at about 10 pounds under my prior plateau, down from 248 to 238. On the down-side, that’s all I got out of 4 months of following the plan. I actually went a bit under 238 for a while, then drifted back up. That was in June, and I’ve been fairly weight-stable since then. I tried several variations, such as varying protein and fat up and down, and keeping protein (moderate) and carbs (low) constant, and varying just fat on the up and down days. The latter seems to result in the least hunger and the most stable mood, but not in any significant weight loss.

I have concluded that I was probably getting a bit too much protein. I think roughly 150 grams/day, give or take, is about the right amount, judging from the way I feel in general. Interestingly, Dr. Pho told me that I should be getting 250+ grams/day, which I am convinced is too much. I have repeatedly noticed that if I eat a meal with 4 to 6 ounces of meat (roughly 90g of protein, maybe a little less depending on the fat content, and I go for fattier cuts), I tend to still be hungry when I finish eating. But an hour later, I’m not, and the comfortably-full feeling will last for several hours. If I have a 14 or 16 ounce steak (rib eye is my favorite, so we’re talking 120-160 grams of protein), I will feel full even before I finish eating, and uncomfortably full after downing the last two or three bites. An hour later, I will be hungry again. Not so hungry that I can’t tough it out, but still noticeably so. I have to conclude that more than about 100g of protein at a meal is just too much for me. 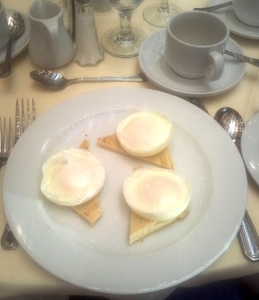 As I am writing this, I’m on yet another cruise (my wife’s favorite type of vacation). As I mentioned, while I was on the Low-Carb Cruise in May, I practically stuffed myself non-stop, and gained less than a pound for the week, or less than my typical daily fluctuation. The one thing that I avoided was anything that was sweetened, either with added sugar or artificial sweeteners (I did eat a bit of fruit). For this cruise, I have decided to take a slightly different approach. In addition to avoiding sweet things, I’m not making a big effort to eat all I can, and trying to have some fish at least once per day. That last part is pretty easy to accomplish on a cruise. For starters, I can have a serving of smoked salmon and two or three poached eggs for breakfast, with some coffee & cream. The poached eggs typically come on top of little 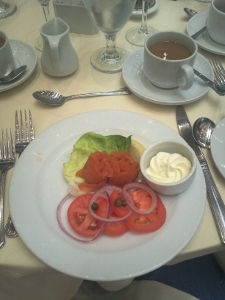 pieces of toast, which I merely leave uneaten. (Edit: I added photos of smoked salmon and poached eggs I had for breakfast. I had basically the same breakfast the three times I ate it in the dining room.)

To recap, the general guidelines for this n=1 experiment (in addition to low-carb/grain-free):

I am co-owner of NEquals1Health.com, along with my wife, Georgene (Mrs N=1). Read more about me on Howard's about page.
View all posts by Mr. N=1 →
This entry was posted in Diet, Health, Intermittent Fasting, Low Carb Cruising!. Bookmark the permalink.