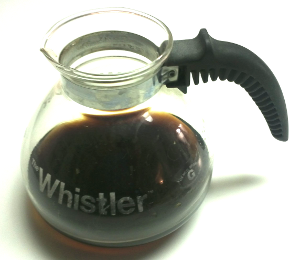 For a very long time, I had occasional severe headaches, but the cause was a mystery. I tried some experiments, and I tracked them down to “caffeine withdrawal.” They were so severe that I would cave and go back to drinking regular coffee.

A friend of mine told me that he had read that headaches were a common symptom of caffeine withdrawal, and that headaches associated with coming out of the effects of anesthesia after surgery were found to be quickly relieved by a little caffeine — but this appeared to be common only to coffee drinkers. I don’t know where he read this, or even if it’s true, but it seemed reasonable. And I accepted that at face value.

Here’s what (today’s version of) Wikipedia has to say about the subject:

Withdrawal symptoms – including headache, irritability, inability to concentrate, drowsiness, insomnia, and pain in the stomach, upper body, and joints – may appear within 12 to 24 hours after discontinuation of caffeine intake, peak at roughly 48 hours, and usually last from 2 to 9 days.[74] Withdrawal headaches are experienced by 52% of people who stopped consuming caffeine for two days after an average of 235 mg caffeine per day prior to that.[75] In prolonged caffeine drinkers, symptoms such as increased depression and anxiety, nausea, vomiting, physical pains and intense desire for caffeine containing beverages are also reported. Peer knowledge, support and interaction may aid withdrawal.

Caffeine withdrawal is categorized as a mental disorder in the DSM-5 (the 5th edition of the Diagnostic and Statistical Manual published by the American Psychiatric Association).[76] Previous versions of the manual included “caffeine intoxication” but not caffeine withdrawal.

I had also read that caffeine’s effects on the brain could be permanent. That was downright depressing. Was I going to be condemned to being a caffeine addict for the rest of my life? And… caffeine withdrawal is classified as a mental disorder?!?!?

Well, I don’t much care for anything having that much control over my life, so I decided to see if I could make it through the up-to-9 days of agony. That was about 3 months ago. I went “cold turkey” — no coffee at all, not even decaf. I got a small bottle of ibuprofen to keep with me to help deal with the inevitable excruciating headache.

Since this was a major violation of my world model, it was obvious that I needed to find the error in that world model, and adjust it accordingly. After a bit of thinking about what Dave Asprey said about coffee, especially decaf, being subject to infection with mycotoxins, it occurred to me that what I had been thinking was caffeine withdrawal might actually be a reaction to something in the decaf coffee. Always before, instead of just quitting all coffee, I had switched to DECAF!

Then, after several days of no coffee at all, I tried drinking decaf. OUCH! A couple of hours after a large mug of decaf, I got a severe headache, which responded only partially to more-than-the-recommended dose of ibuprofen.

Mycotoxins? Maybe, maybe not — but I now know for sure that something in the decaf I was drinking was causing my headaches. It might even be just the specific brand of decaf we have at the house (Georgene likes it, we have kept a large stock of it for a long time — and it doesn’t bother her that way).

I’m smart enough to not do that anymore. It may be overkill, but I simply do not drink decaf coffee anymore. At all. Even though we still have a large stock of the stuff in the freezer. I have also quit drinking any coffee that I have not brewed myself. That may mean no coffee on the next cruise unless I pack it.

BTW, I have become a big fan of Bulletproof Coffee since the low-carb cruise, and I have been drinking it for several weeks now. With occasional days off, just to verify that I don’t get withdrawal headaches, which I don’t.

I now wonder if most, if not all, “caffeine withdrawal” is actually something very much along that same line, with a research confounder lurking in the decaf. That would make an interesting study, but I don’t expect to see any such study. However, if YOU have experienced headaches after switching to decaf, you might want to try this “n=1” experiment — and if you do, please let me know how it turned out!

I am co-owner of NEquals1Health.com, along with my wife, Georgene (Mrs N=1). Read more about me on Howard's about page.
View all posts by Mr. N=1 →
This entry was posted in Health, Nutritional Research. Bookmark the permalink.