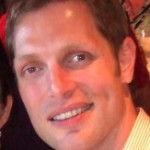 Another of the celebrities on last year’s Low-Carb cruise was Dr. Andreas Eenfeldt, from Sweden. I had the enormous pleasure of sitting next to Dr. Eenfeldt at dinner during the cruise. The photo at the left is one that I took during that dinner. I hope to get a better photo of him this year, maybe standing next to yours truly (I’m 6ft tall, and Dr Eenfeldt towers over me).

The “Blogosphere” has been quite active lately with news of low-carb. Aside from frantic attacks from True Believers of the Low-Fat/Vegetarian/Vegan Religion, there has been some actual science reported (shocker!). One of the big events of the year was the Ancestral Health Symposium 2011, which I am sad to say that I was not able to attend.

Over on the Diet Doctor Blog of Dr. Andreas Eenfeldt, MD, he has published a video of his lecture at the Ancestral Health Symposium 2011. In his post, he encouraged readers to spread the word:

In the video, Dr. Eenfeldt talks about the LCHF food revolution in Sweden, and the wonderful effect it has had on the overall health of the population of that country. He pretty much eviscerates the commonly-held low-fat superstition.

The video is nearly an hour long, but well worth the watch. Rather than embed the video here, I would invite you to visit and browse Dr. Eenfeldt’s blog (link above). The Diet Doctor is rapidly becoming one of the biggest blogs in the nutrition world.