The Only Significant Variable in any Nutritional “Study” 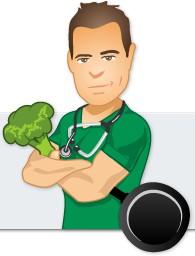 Over on Andreas Eenfeldt’s blog, there is a long, ongoing back-and-forth battle in the comments on this post between some ignoramus who is repeatedly pointing out how all the “studies” prove that grain (and fiber) are good for everyone. (He did make an exception for celiacs).

It’s interesting that there are still people out there who enthusiastically drink the Grain Food Foundation’s Kool-Aid.

And fiber? There is no compelling evidence that dietary fiber is necessary, or even beneficial. In fact, some forms of fiber (e.g., those in “hearthealthywholegrains”) may well be harmful.

Back when I started low-carb, I spent a lot of time looking up nutritional studies. I read several hundred of them online (the ones I could get), and I even looked some up in the local library. However, after a while, I started noticing a definite trend: There was only one significant variable in any of the “studies,” namely, who paid for them.

It got to be common knowledge that there were many “studies” that were run, but buried because they did not yield the results required by the sponsor that paid the bills.

Interestingly, the gaming of the journal system by Big Pharma and Big Food (and others with vested interests in selling us stuff that may not be good for us) got so pervasive (and blatant) that many of the more reputable journals started requiring the protocols of all studies to be registered and made public before the actual study was done, in order to get published.

So that stopped the gaming of the system. NOT.

That restriction is so easy to get around that it’s just laughable. All the sponsor needs to do is run a private study in which everything is very carefully measured, so that the “advanced” posting of the study protocol can be adjusted to guarantee the desired results when the public “study” is actually done. This is commonly called “Tobacco Science.”

Do I have proof that this sort of thing happens? Of course not. But Big Pharma/Food/whatever would be really stupid not to do this, and I don’t believe that they are stupid. And that theory very effectively explains why there are “studies” that compare “hearthealthywholegrains” against “refined grains,” but absolutely no studies that compare grains against no grains at all. And there never will be, at least until somebody with deep pockets and a lack of vested interest in the current status quo pays for one.

And in case you are waiting for NuSI(*) to do one, I predict that if such a study is even proposed, it will be attacked viciously by whatever means available (probably very expensive legal actions for alleged “ethics violations”) by folks who would really rather not see the truth revealed. In fact, I have already seen the beginnings of an active PR/smear campaign being waged against NuSI (and Gary Taubes specifically), and I’m guessing that NuSI is going to have a lot of trouble getting adequate funding for that sort of study. Even if such a study actually is done, the journals are very likely to succumb to pressure not to publish it.

So don’t hold your breath.