Interview with Jacqueline Eberstein, R.N. on the 2014 Low Carb Cruise 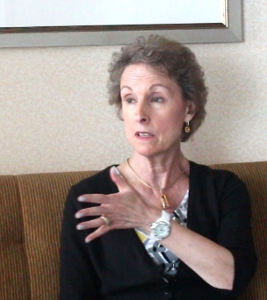 Georgene and I had heard Jackie Eberstein speak on each of the Low-Carb Cruises that we have attended, including this one, but this is the first time I got to chat with her one-on-one.  We were both struck by how generous Jackie is with her time, and how friendly and gregarious she is with all the cruise participants.

Jackie served as Dr. Atkins’ office nurse for nearly 30 years.   As a result, she became an expert on his methods as they evolved, as well as his plans for the future. The story about how she initially got that job is really interesting!

You’ll note that everything changes in the middle of the recording — the lighting, and even the clothes. That’s because I experienced a technical problem (ok, I screwed up…) and had to do the rest of the interview the next day. Jackie was extremely generous with her time, especially considering that she and Conrad were celebrating their 41st wedding anniversary on the cruise.

This concludes the series of interviews we did on the cruise. I think that they all turned out really well, especially considering my lack of experience as an interviewer. We enjoyed all of them.

I think that the interview with the lady who was in on the ground floor of the Low-Carb revolution is a fitting one to use as the conclusion of this series.

Jackie sent this note about the most effective forms of magnesium: “Bob used magnesium orotate the most because it was well absorbed. It can be hard to find. Others he used were magnesium citrate, magnesium taurate and chelated magnesium.”