Back from the Low Carb Meet-and-Greet!

We just arrived back from the Low Carb Meet-and-Greet yesterday afternoon.

We were pooped!  Thank goodness both of us are good drivers, so that we could share the chore, and even at that, it was pretty tiring!  We did, after all, drive more than 1,700 miles to attend a party. But, aside from some horrible congestion around Louisville, we had no major problems.  Trust me: you do NOT want to go to Louisville on a hot (106 degrees) Friday afternoon at rush hour, especially if you are trying to get anywhere on Interstates 65, 64, or 71.  It was unreal!

The party was four hours long.  There were so many people to meet, and so many to catch up with since the cruise in May, it just didn’t last long enough (though I am pretty sure Dana and Eric were ready to get their house back after it was all over)!  There were some fifty people signed up to come, and even though the house was really big, there was either a person or a dog – sometimes both – in pretty much every square inch of the public area! 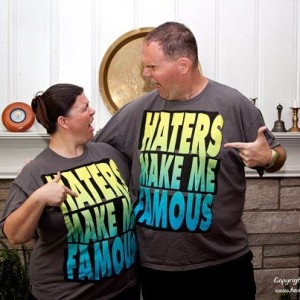 Not only was there a ton of great low carb food (how refreshing to not have to ask what’s in everything on the table), but the conversation and antics were nonstop!  My favorite moment was when Amy Dungan and Jimmy Moore donned their brand new “Haters Make Me Famous” Tee Shirts!  Here they are hamming it up for the camera.

Those of you who have known Amy and Jimmy for any length of time know why these tees are so funny!  Much laughter was had at the expense of the “hater” referenced in these tee shirts! Sometimes, all you can do is laugh and keep on being yourselves, knowing that in the end, the hater is going to lose.

I spent some time outside with Dana’s chickens, too.  I saw some eggs laying in the pen on the ground, but decided to leave them there.  I figured Dana had her schedule and the hens probably wouldn’t take too well to me interfering with their business.  When I used to have chickens it wasn’t unknown for me to follow them around and grab the eggs while they were still warm!  But those were days gone by, but I surely enjoyed seeing Dana and Eric’s chickens….doing what chickens do.

And then, and THEN!  I was sitting in a chair by the couch, visiting with people and minding my own business, and  Dana comes running through in her inimitable fashion, and yells at me to get up out of that chair!  I jumped up immediately, convinced I had sat on the cat and smothered it, and she grabbed another, well-worn chair, and demanded I sit in that one.  One does not argue with Dana Carpender when she is directing the activities, so I wasted no time sitting, but I was still wondering what I had done wrong. 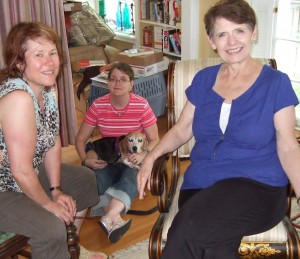 Dana Carpender, Christine Moore and me in The Chair!

Dana commenced to tell a story about her ancestor, Colonel John Nielson, who served honorably in the Revolutionary War and owned that chair (meaning, that is one heck of an OLD chair).  I started to get nervous that maybe I might break it or something, but Dana continued on with her story and made me stay there.  It seems her ancestor liked to visit with folks a lot (remember – they had no TV or even radio, so they had to actually talk to one another) and he had a particular old army buddy named George who really liked that chair and sat in it every time he came to visit.

I was beginning to wonder who this “George” was, when all was made clear.  Go look at one of your one dollar bills….whose picture is on it?  Yes, it was THAT George – George Washington – who sat in the chair I was at that minute occupying.  I still get chills when I think about it!

Howard has a lot more pictures and many other things to say about the party.  I don’t care if it DID only last four hours, it was worth every minute of the drive – AND – we had the honor of being the guests from the farthest away.