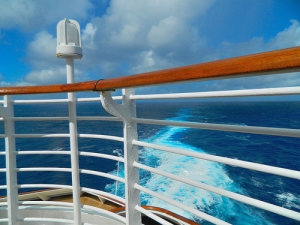 I’ve been trying really hard not to get too excited about the 2013 Low Carb Cruise coming up (just a week away)!  That way, time doesn’t drag so much.

I haven’t even started packing yet.  There’s a reason for that:  If I start (but don’t finish) packing, even with the most detailed of lists, I can’t seem to remember what has gone in the bag and what hasn’t.  And because I carry very minimal luggage,  I have to get it right or risk missing something important. So, I start piling stuff on the bed in the extra room (in a somewhat orderly fashion) about a week early, so I can see what’s there and what’s not, and then the night before I leave, I start cramming it in.

Well, I’m a little more orderly than that (but not much).  I use eBags Packing Cubes to keep everything neat and contained. That’s more important than it sounds, because when you have your clothing rolled up as small as you can get it, it “wants” to come unrolled.  eBags keep that from happening!

I also am trying a new system this time, called Magic Bag Instant Space.   You fold everything up neatly and place it in the bag, squish all the air out and seal it!  This is supposed to save a lot of space and keep the items neat and well-folded.  We shall see!

So, what are the updates?  First the words is out that Dr. Annika Dalqvist will be a guest on the cruise, which is very exciting news!  Dr. Dalqvist is the Swedish doctor who forced the National Food Administration in Sweden to accept the Low Carb High Fat as a diet, officially recognized as suitable for use in treating patients.  You can see Dr. Dalqvist’s site at this link. (update 1/6/2014: Dr. Dalqvist’s BlogSpot site has been removed).

Second, Veronica Atkins, widow of the late Dr. Robert Atkins will be a guest also!  We had hoped she would be with us last year but she couldn’t make it.  This year, we’re all in for a treat, as Jacqueline Eberstein, Dr. Atkins’ nurse for 30 years, gives a tribute to the good Doctor.

So, you see, it’s going to be a great cruise, with fun to be had for all.  We’ll be updating here, as Howard has secured an interview with The Bulletproof Executive, Dave Asprey.  He is pumped about that!

Georgene Harkness is co-owner of NEquals1Health.com, along with her husband, Howard (Mr. N=1). Read more about Georgene on her About Georgene page.
View all posts by Mrs. N=1 →
This entry was posted in Low Carb Cruising!. Bookmark the permalink.